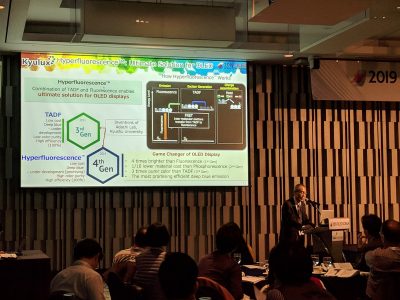 END_OF_DOCUMENT_TOKEN_TO_BE_REPLACED

The first-generation OLED emitter systems, based on fluorescence, lack efficiency as only about 25% of the energy is converted into light. More advanced systems, based on phosphorescence (PHOLED), TADF and our own Hyperfluorescence (HF) technology all manage to convert almost 100% of the energy into light, and so it is mistakenly perceived that such systems all offer the same efficiency. 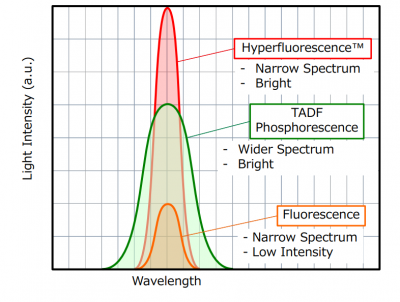 The reality, however, is that Kyulux’s HF systems offer an inherent advantage that enables it to provide the most efficient OLED emitters of all four generations. As seen in the graph above, HF emitters are the only emitters that offer both a narrow spectrum and high-efficiency. HF can be thought of as a combination of the high efficiency of TADF and the narrow spectrum of Fluorescence.

END_OF_DOCUMENT_TOKEN_TO_BE_REPLACED

Wisechip demonstrated a yellow PMOLED device that featured a lifetime of over 30,000 hours (LT50) and an EQE of 14.6%, while still maintaining high color purity. Wisechip aims to release the first yellow and green HF PMOLEDs by the end of 2017, with red, blue and white displays planned for commercial launch in the near future.

During the TADF Workshop which was held in July 2017 in Kyushu, Japan, Wisechip’s VP of R&D Engineering Division, Dr. York Tsai, gave a presentation that detailed the Hyperfluorescence-PMOLED development effort that led to the successful demonstration and future introduction. It was a great presentation that clearly showed the advantages of our materials and their applications in Wisechip’s PMOLED displays.

END_OF_DOCUMENT_TOKEN_TO_BE_REPLACED

The demonstrated display was a 0.96″ 128×64 monochrome (yellow) PMOLED. The EQE of the HF model is 14.5% compared to only 7.1% in the fluorescence display. We have now published the video above that very nicely shows the display in action and the whole demonstration – even though it is quite difficult to see just how brighter the HF display is. The image below shows this better.