END_OF_DOCUMENT_TOKEN_TO_BE_REPLACED

The premier display industry event, SID DisplayWeek, is now over – and it was a great week. Kyulux had a successful booth demonstration, with a lot of interest from display companies as Hyperfluorescence emitter technology is maturing and is ready to be commercialized.

During the show, Kyulux unveiled Wisechip’s flexible HF PMOLED display, which we already posted on. This display is set to be the world’s first commercial HF display, and will hopefully enter mass production by the end of the year. Kyulux also demonstrated a smaller yellow PMOLED HF device, again produced at Wisechip. This is a 0.87-inch display with a resolution of 216×128. In the demonstration, Kyulux showed how the HF display is almost twice as bright (210 nits vs 110 nits) than Wisechip’s regular fluorescent PMOLED, using the same amount of power.

END_OF_DOCUMENT_TOKEN_TO_BE_REPLACED

Wisechip demonstrated a yellow PMOLED device that featured a lifetime of over 30,000 hours (LT50) and an EQE of 14.6%, while still maintaining high color purity. Wisechip aims to release the first yellow and green HF PMOLEDs by the end of 2017, with red, blue and white displays planned for commercial launch in the near future.

During the TADF Workshop which was held in July 2017 in Kyushu, Japan, Wisechip’s VP of R&D Engineering Division, Dr. York Tsai, gave a presentation that detailed the Hyperfluorescence-PMOLED development effort that led to the successful demonstration and future introduction. It was a great presentation that clearly showed the advantages of our materials and their applications in Wisechip’s PMOLED displays.

END_OF_DOCUMENT_TOKEN_TO_BE_REPLACED

Is Hyperfluorescence ready for AMOLED adoption?

Two weeks ago we announced a collaboration with WiseChip Semiconductor to use Hyperfluorescence emitters in WiseChip’s PMOLED displays. In early July, Wisechip demonstrated a working yellow monochrome prototype – with commercial production expected by the end of 2017 for both yellow and green displays. 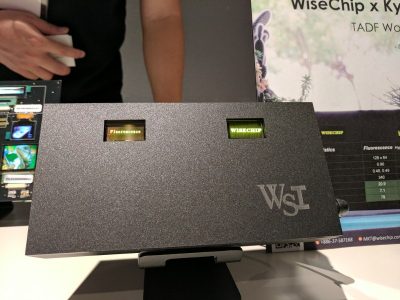 Hyperfluorescence emitters enabled WiseChip to boost the efficiency by around 50% while still maintaining the color purity and a lifetime of over 30,000 hours (LT50). 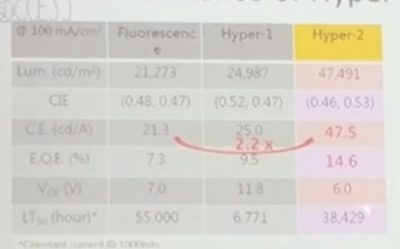 Following this announcement, questions were raised as to the relevance of this technology for use in AMOLED displays, which represents a much larger market ($20 billion in 2017 and continue to grow fast compared to PMOLEDs’ $0.5 – 1 billion). Even though one should not rush to discount the PMOLEDs market, which is expected to stay relevant and grow (with the rise of wearables and introduction of flexible and transparent displays), it is clear that the AMOLED segment of the market remains dominant. In this article, we set out to clarify the difference between the two technologies and lift any doubt regarding the readiness of HF technology for AMOLED displays.