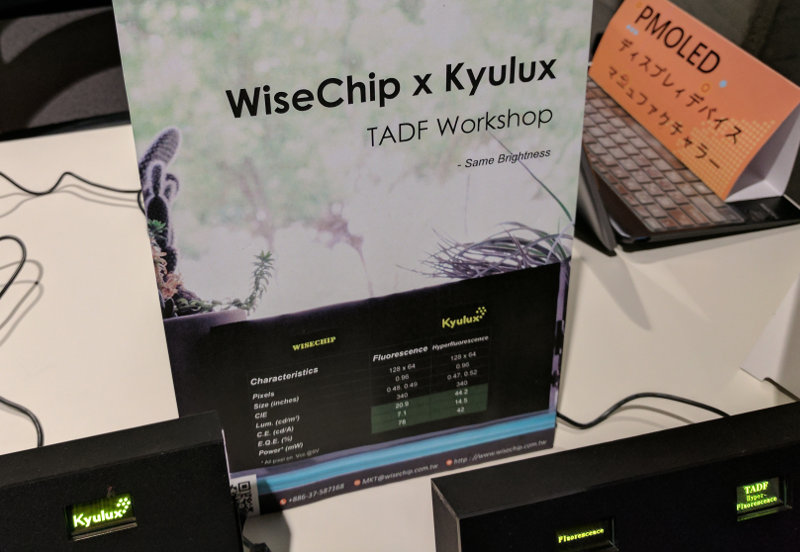 Hyperfluorescence™ is a 4th generation OLED technology that outperforms all previous generations of OLED emitters. The first generation of fluorescent compounds used for blue pixels in today’s cell phones and televisions are only 25% efficient and thus reduce the energy efficiency or battery life. The second generation green and red emitters used in cell phones and televisions are 100% efficient, but they use an expensive rare metal Iridium. This second generation of materials also suffers from an inferior color purity compared to the first generation. Fourth generation HyperfluorescenceTM allows for 100% quantum efficiency in a completely organic molecule without requiring the use of rare heavy metals to attain 100% efficiency. Further, HyperfluorescenceTM technology combines the superior color purity of gen 1 materials and the efficiency of gen 2 materials, allowing for increased battery life or increased brightness without sacrificing color purity.

Professor Chihaya Adachi, Co-founder of Kyulux and inventor of TADF and HyperfluorescenceTM technologies said, “It is fantastic to see that TADF technology will be deployed in a HyperfluorescenceTM commercial product. The technology, invented at Kyushu University in 2009 has seen a tremendous improvement in lifetime and efficiency over the years and is now poised to take over as the prevailing commercial OLED technology. I have particularly enjoyed watching this technology mature in the collaboration between Kyulux and WiseChip.”

Dr. York Tsai, Vice President of R&D Engineering Division of WiseChip Semiconductor stated, “We are very pleased with the close collaboration between WiseChip and Kyulux that has allowed us to rapidly deploy HyperfluorescenceTM into a commercial device. Our engineers have worked very hard together to deliver the world’s first product utilizing this disruptive new emitter technology.”

Hong Jun Wang, Chairman of WiseChip Semiconductor said, “We are delighted for the opportunity to become the world’s first display manufacturer to incorporate 4th generation OLED technology into a commercial product. Our close collaborative work with Kyulux will allow us to offer superior OLED devices to our current and future customers.”

Dr. Christopher Savoie, CEO of Kyulux stated, “We are thrilled to be able to offer a TADF HyperfluorescenceTM product by year end. This would not have been possible without the skilled engineering capabilities of both companies. I am very proud of the joint team effort that has made this commercialization happen so quickly.”

Kyulux is a leader in developing and delivering the next generation of organic light emitting diode (OLED) technology, TADF. Kyulux develops and sells TADF and HyperfluorescenceTM based OLED materials and solutions to manufacturers in the display and lighting industries.

Kyulux is based in Fukuoka, Japan, with an advanced research and development center in Boston, Massachusetts. For further information please visit: Kyulux.com