The Kyulux team will be attending the nanotech2020 event – an international nanotechnology exhibition and conference, on January 29-31. The team will be happy to welcome visitors!

See you at Tokyo Big Site, Kyulux booth, West hall 2 in the Public organization/University/Labs zone at the Kyushu University area!

On January 7, 2020, a New Year kickoff meeting was held at the Kyulux head office in Fukuoka. 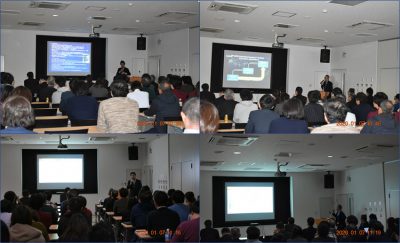 The meeting was attended by Kyulux’s executives, including Kyulux technical adviser Prof. Adachi. The executives sent heartfelt wishes to the 70 new and old members (a number which will further increase in the future), announced plans for the new year and expressed their intentions and will to achieve the goals set for 2020.

All Kyulux members look forward to a breakthrough year on our journey to commercialize TADF\HF OLED emitters! 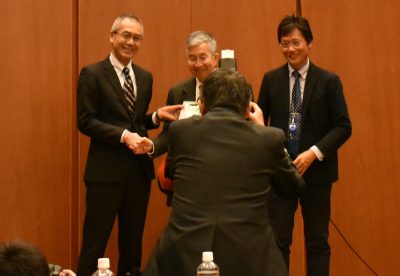 Before the closing conference, Kyulux’s CEO Junji Adachi presented the world’s first Hyperfluorescence ™ PMOLED product demonstration kit, which was announced by Wisechip in October this year, with Prof. Chihaya Adachi (Professor of Kyushu University and Technical Advisor of Kyulux).

In the 30 years that have passed since Dr. Tang’s first research of OLEDs, much progress has been made. Dr. Tang, the creator of OLEDs, was excited about the future prospects of OLEDs, among then is the latest PMOLED panel that uses Kyulux’s Hyperfluorescence™ technology.

END_OF_DOCUMENT_TOKEN_TO_BE_REPLACED

The 2019 international TADF Workshop took place in Fukuoka on August 19-20. The workshop marked the 10-year anniversary of TADF, and this was an exciting and fruitful event. 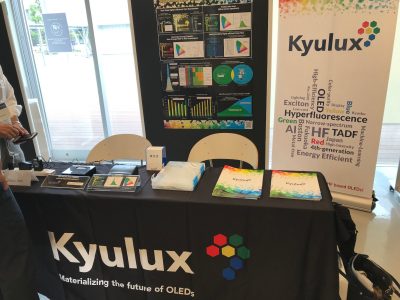 Kyulux, one of the sponsors of this special event, had a booth at the exhibition, and we showcased our technology and materials with prototype panels on display. Kyulux’s CEO Junji Adachi gave a lecture titled “Towards Commercialization of Hyperfluorescence™.

END_OF_DOCUMENT_TOKEN_TO_BE_REPLACED

The 28th Japan OLED Forum will be held at Odaiba, Tokyo International Exchange Plaza Heisei, 3rd floor of the “International Conference Hall” on Thursday – Friday, June 13-14, 2019.
Kyulux will exhibit TADF / Hyperfluorescence panels at its corporate booths. We look forward to seeing you there!

During the event, Kyulux’s CEO, Junji Adachi, will give a lecture titled “HyperfluorescenceTM; a Game Changing Technology of OLED Display” on Thursday (June 13th) 11:00 to 11:30 a.m.

END_OF_DOCUMENT_TOKEN_TO_BE_REPLACED

Kyulux to be featured in the 2019 Japan-US Innovation Showcase

The Japan-U.S. Innovation Awards Program announced five Japanese startup companies to be featured in the 2019 Innovation Showcase (now in its ninth year) that will take place on July 26th at Stanford University. The Innovation Showcase recognizes young and rapidly growing companies that develop exciting technologies and have the potential for major worldwide impact.

Kyulux was one of the five chosen companies, and Kyulux’s CEO Junji Adachi and CFO Akira Minakuchi will represent Kyulux in the event and share the story of Kyulux’s innovation and recent progress. The other four companies are Atonarp (molecular camera), Cinnamon (AI), Triple W (connected health devices) and Valuenex (AI and predictive analytics).